First time visitors to the town of New Bern should be aware that there is only one cola drink to ask for in this town!

The community has a proud history as the Birthplace of Pepsi Cola, and this claim to fame is celebrated at a number of locales around downtown, including the newly built Pepsi Family Center at the North Carolina History Center, (an interactive museum that takes patrons back in time to the year 1835), the innumerable antique stores which showcase pristine old Pepsi bottles, and the signature Pepsi Store.

Any of these attractions are worth taking the time to check out, and visitors should not find it surprising that Pepsi is the star of most local memorabilia, local menus, and drug store soda shops all around the town. 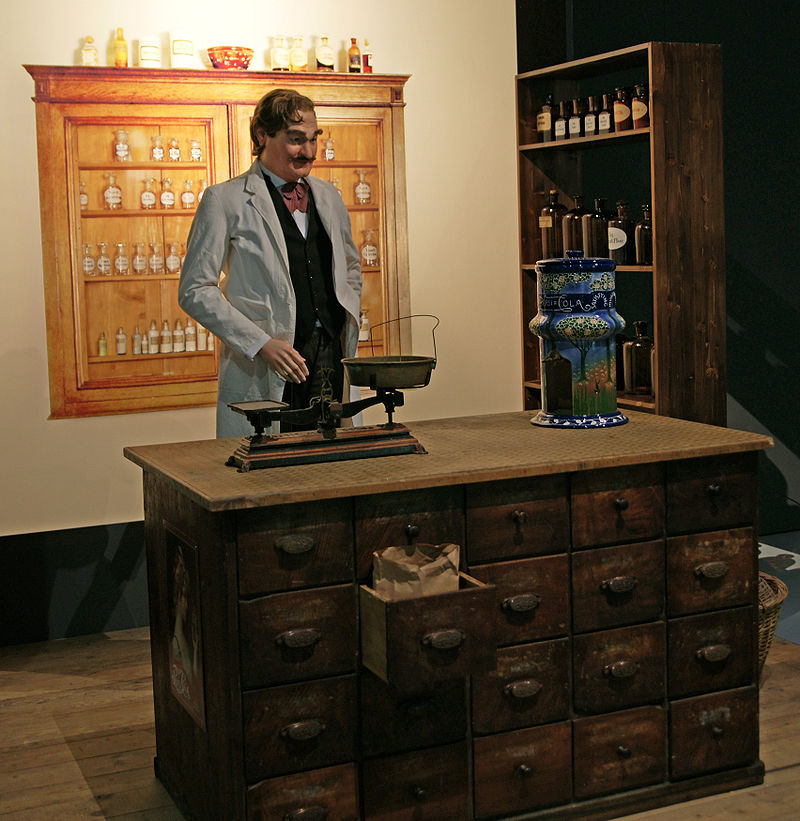 The drink we know as Pepsi-Cola® was first created as “Brad’s Drink” in New Bern, North Carolina, in 1893 by Caleb Bradham. Mr. Bradham made it at his drugstore where he sold the drink.

In 1898 it was renamed Pepsi-Cola® after the root of the word “dyspepsia” and the kola nuts that were used in the recipe. Caleb Bradham’s original recipe also included sugar and vanilla.

Bradham set out to create a fountain drink that was both appealing and to help with digestion and give an energy boost.

Bradham moved the bottling of Pepsi-Cola® from his drugstore to a rented warehouse in 1903. That same year, he sold 7,968 gallons of syrup.

The first celebrity endorsement was from automobile racing pioneer Barney Oldfield in 1909. Oldfield called it “A bully drink…refreshing, invigorating, a fine bracer before a race.”

“Delicious and Healthful” became Pepsi’s advertising theme and was used continuously for the next twenty years.

Pepsi had its logo redesigned in 1926, the first time it changed since its original design in 1905. It was changed again 1929.

During the worst year of the Great Depression, the Pepsi-Cola® Company entered into bankruptcy,largely the due to financial losses brought on by speculation on the wildly fluctuating sugar prices that came as a result of World War I.

The assets of Pepsi were sold with the trademark purchased by a gentleman by the name of Roy C. Megargel.

Mr. Megargel was not successful, and Pepsi-Cola®’s assets were soon purchased by Charles Guth, the President of Loft, Inc.

Loft was a candy manufacturer with retail stores that contained soda fountains. Loft set out to replace Coca-Cola at the fountains in his stores after Coke refused to give him a discount on syrup. Mr. Guth then had the chemists at Loft’s reformulate the Pepsi-Cola syrup formula.

Between 1922 and 1933, The Coca-Cola® Company was offered the opportunity to purchase the Pepsi-Cola company on three separate occasions. Each time it declined on each occasion.

During the Great Depression, Pepsi gained popularity following the introduction in 1936 of a 12-ounce bottle employing a radio advertising campaign which featured the jingle:

“Pepsi-Cola® hits the spot – Twelve full ounces, that’s a lot -Twice as much for a nickel, too – Pepsi-Cola is the drink for you”.  The jingle was arranged so that it never ends.

Price-conscious consumers were encouraged to switch to Pepsi®, as the Pepsi 12 once bottle was nearly “twice as much” as the standard 6.5 ounce Coca-Cola bottle for the same price of five cents (a nickel). With this campaign during a time of economic crisis, Pepsi was successful in boosting sales. From 1936 to 1938, Pepsi-Cola’s profits doubled!

Up until the 1940s, the full revenue potential of what was called “the Negro market” was largely ignored by white-owned manufacturers in the U.S.

Realizing that blacks were an untapped niche market and that Pepsi stood to gain market share by targeting its advertising directly towards them Pepsi hired Hennan Smith, an advertising executive “from the Negro newspaper field” to lead an all-black sales team, which had to be cut due to the onset of World War II.

In 1947 these efforts resumed with the hiring of Edward F. Boyd to lead a twelve-man team. They came up with advertising portraying black Americans in a positive light, such as one with a smiling mother holding a six pack of Pepsi while her son (a young Ron Brown, who grew up to be Secretary of Commerce) reaches up for one.

Boyd also led a sales team composed entirely of blacks around the country to promote Pepsi.

Pepsi advertisements avoided the stereotypical images common in the major media that depicted one-dimensional Aunt Jemimas and Uncle Bens. Instead, it portrayed black customers as self-confident middle-class citizens who showed very good taste in their soft drinks. They were economical too, as Pepsi bottles were twice the size.

Today Pepsi or Pepsi-Cola® is a household name recognized throughout the world! One has to wonder what Caleb Bradham would think of the success of the simple tonic conceived in his humble drugstore?

The Birthplace of Pepsi:

Visitors are welcome at The Birthplace of Pepsi-Cola Store where they can learn more about the history of its inventor and the early days of one of the world’s favorite soft drinks.

Visit the Birthplace where you can step back in time enjoying a fountain Pepsi or browse through their gifts and souvenirs.

The Birthplace is open Monday through Saturday 10am until 6pm and Sundays 12 noon until 4pm.