From the book: Pirates of the Carolinas:

Edward Teach, known as The Pirate Blackbeard, is perhaps the best known of all pirates. He certainly rates his place at the top of the list of Carolina pirates.

The facts of Blackbeard’s early life are sketchy. He was born around 1680 in the British port town of Bristol and went to sea at an early age. He served as a seaman on a British ship in the War of the Spanish Succession, privateering in the Spanish West Indies.

Britain dropped out of the War in 1713, and Teach turned to piracy, as did many other privateers. 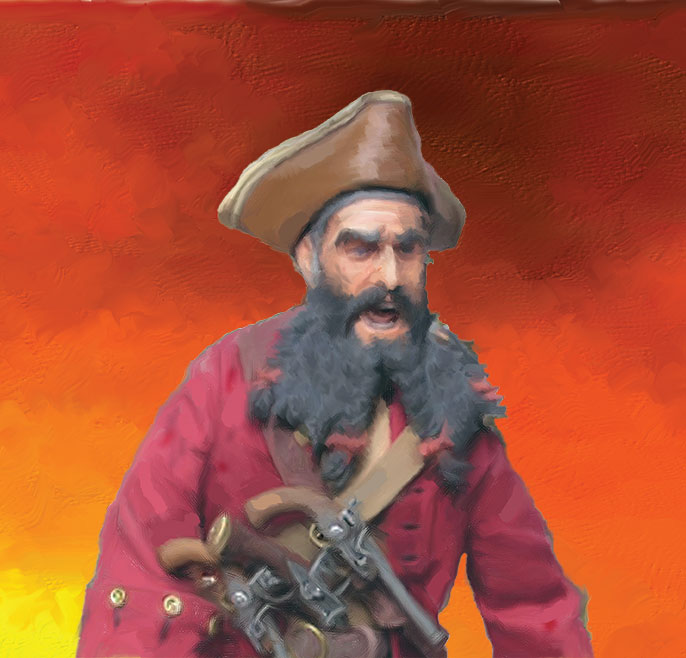 Blackbeard soon made a name for himself by enhancing his notoriety with his fearsome black beard into which he tied burning tapers when he went into battle.

The ability to inspire fear into victims was a great asset to a pirate. Cowering victims into surrendering in hopes of saving their lives was preferred over combat by pirates. Pirates were not immune to death or injury in a fight.

Teach’s numerous loaded pistols which adorned his clothing also helped create his fearsome appearance, and it gave him an advantage in combat in an age of single shot pistols.

Merchant ships plundered by Blackbeard were relieved of all their valuables, food, liquor, and weapons. But Despite his ferocious reputation, there is no account of him actually killing anyone that can be verified.

Blackbeard learned the trade of piracy as a member of the crew of Benjamin Hornigold, a notorious pirate based in Jamaica.

Hornigold  angered his crew by his reluctance to attack British-flagged ships, and was overthrown by the crew in November 1717.

Hornigold was put out to sea in a small boat and Blackbeard was elected the new captain. He took command  of a French slave ship La Concorde, one of  Capt. Hornigold’s recent prizes, She was renaming Queen Anne’s Revenge and armed with 40 guns.

She would remain Blackbeard’s flagship for most of his career. Blackbeard secured his claim to pirate fame by his blockade of Charleston, South Carolina In late May 1718.

Charleston was a small, but very rich city and it was the largest port in the southern colonies.

When Blackbeard’s Queen Anne’s Revenge and three lighter vessels entered the mouth of Charleston harbour they captured five merchant freighters attempting to enter or leave the port. Other vessels could not transit the harbour lest they encounter the pirate squadron.

A group of prominent Charleston citizens, including Samuel Wragg was on board one of the ships that Blackbeard captured in the harbor mouth. Blackbeard held these valuable hostages for ransom. He made an unusual demand for their release: a chest of medicine,. and a deputation was sent ashore to negotiate this ransom.

Blackbeard’s pirate envoys had a preference for carousing rather than bargaining, At least partly for this reason the ransom took some days to be delivered, and the furious Blackbeard evidently came close to murdering his prisoners.

The medicines were eventually turned over, and Blackbeard released the hostages. They were unharmed but deprived of their dignity. They were released in the nude without their clothing.

Blackbeard’s whole squadron then sailed northward up the Carolina coast to the small town of Bath.

Bath, North Carolina’s oldest city, is a very small town and in 1718 when Blackbeard made it his base it was even smaller, hardly even a village with barely a dozen or so houses.

A 400 acre plantation at Bath was occupied by Charles Eden, the Governor of the Colony.

When Blackbeard arrived in Bath in June 1718, Eden immediately gave him the “gracious pardon” of the Royal Proclamation. Eden is believed to have benefited from Blackbeard’s piracy, but this was never proven. However Tobias Knight — secretary of the colony — was later tried before Council for being an accessory to piratical acts associated with Blackbeard and his crew.

Blackbeard married the teenage daughter of a Bath County planter as his fourteenth bride. Governor Eden performed the wedding ceremony. This incident has been sited that Blackbeard and the governor were in cahoots.

When Blackbeard and his crew sailed into Bath the sleepy little village awoke and became a very lively place. Their loot was eagerly purchased by towns people and shopkeepers for resale with no questions asked.

The hard drinking pirates, gorged on rum, engaged in wild sprees and regaled the village people with lies and tall tales of their exploits at sea.

Blackbeard, soon became a subject of fascination — with people eager to meet and talk with him. The infamous pirate quickly gained a degree of celebrity among the villagers. 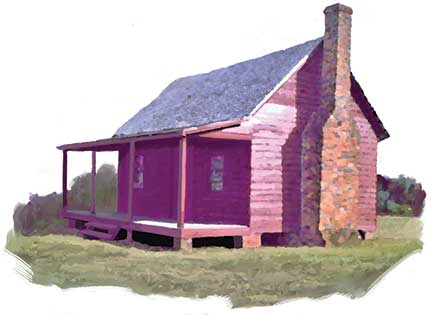 Teach’s home in Bath was the center of lavish entertainment, and he was invited into the homes of wealthy planters. Blackbeard boasted that he would be welcome in any home in North Carolina for dinner.

Teach convinced the villagers that the pirates were their friends.

As historian Robert Lee has noted, “In Blackbeard’s era unpardoned acts of piracy were “condoned, if not sanctioned, by the law [and] it was not beneath persons of family and respectability to take part in such acts.”

Teach and his crew were living a comfortable existence and had the king’s pardon, but their semi-retirement was short lived. Within a few months they returned to piracy on the high seas.

Shortly after leaving Bath, Blackbeard had  run two of his vessels, the Queen Anne’s Revenge, and the Adventure, aground while attempting to enter Topsail Inlet (now Beaufort Inlet.)

Blackbeard disbanded his flotilla and escaped by transferring supplies onto a smaller ship with a smaller crew. He is believed to have deliberately run the ships aground in order to increase his own share of the treasure by downsizing his crew.

Governor Alexander Spotswood of Virginia was a different sort of governor from Governor Eden of North Carolina. He had become concerned that the notorious pirate lived nearby. Spotswood decided to eliminate Blackbeard, even though he did not live within Spotswood’s jurisdiction.

Governor Spotswood of Virginia acquired two small sloops which were put under the command of Lieutenant Robert Maynard of the royal navy. Maynard’s instructions from Spotswood were to hunt down and destroy Blackbeard, offering a reward of £100, and smaller sums for the lesser crew members.

Maynard sailed from James River on November 11, 1718, in command of the hired sloops, Ranger and Jane, (temporarily commissioned as His Majesty’s Ships). His crews consisted of thirty men from HMS Pearl, and twenty-five men and a midshipman of HMS Lyme. Lieutenant Maynard discovered  Blackbeard at anchor in an inlet on North Carolina’s Ocracoke Island, on the evening of November 21. 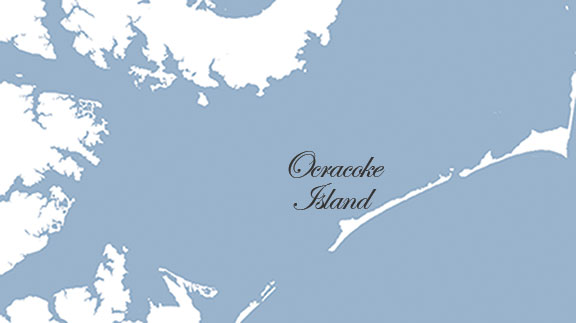 Maynard and his men waited until the next morning to take advantage of a more favorable tide.

Blackbeard’s ship the Adventure had a crew of only nineteen men, “Thirteen white and six Negroes.”

A small boat sent ahead at daybreak, quickly retreated when fired on. Blackbeard’s familiarity with the inlet gave him an advantage, although he and his crew had engaged in heavy drinking the night before. Blackbeard waited all night for Maynard to make his move. Maynard gave chase when Blackbeard cut his anchor cable and quickly attempted to move towards a narrow channel; however, the sloops ran aground, and there was a shouted exchange between the enemy captains. Maynard’s account records, “At our first salutation, he drank Damnation to me and my Men, whom he called Cowardly Puppies, saying, He would neither give nor take Quarter.”

Eventually, Maynard’s sloops floated free again,  and he began rowing towards Blackbeard, since there was too little wind at the time for sailing. When they neared Blackbeard’s Adventure, they were greeted with a powerful broadside that killed midshipman Hyde, captain of the smaller Jane, and six other men. The surprise attack also wounded ten men of Maynard’s men.

The wounded sloop fell astern and was out of action. Maynard’s Ranger, managed to blast the Adventure’s rigging, forcing it ashore as Maynard continued his pursuit. As Maynard readied his ship to be boarded he ordered many members of his crew to conceal themselves in the holds.

Blackbeard, thinking the decks were mostly empty, assumed it was safe to board, and went over the side with ten men. Gunpowder smoke from several grenades made by filling rum bottles with gunpowder preceded Blackbeard’s assault and obscured Maynard’s view of Blackbeard’s boarders.

Maynard’s men emerged amid the smoke and debris, and the battle began. There is disagreement about the exact circumstances of Blackbeard’s death, but the following account comes from a Boston Newspaper of the time.

“Maynard and Teach, almost immediately, through themselves at each other with their swords. Maynard made a thrust, the point of his sword struck Teach’s cartridge box, bending it to the hilt. Teach broke the guard on Maynard’s sword, and Maynard’s fingers were blooded but he carried on the fight, whereupon he jumped back, discarded his sword, and drew his pistol, and fired wounding Teach. Abraham Demelt, one of Maynard’s men, intervened and slashed Teach’s face; in the interim the remainder of Blackbeard’s crew had boarded Maynard’s ship and both companies engaged in the brawl. Later during the battle, while Teach was fighting Maynard another of Maynard’s men came and killed Blackbeard by slashing his neck. Maynard then whacked off his head and hung it from the bow of his ship.”

Teach’s death ended the battle despite the best efforts of the pirates. The mighty Blackbeard had put up a desperate fight and proved hard to kill. He was reportedly shot five times and stabbed more than twenty times before he died and lost his head.
Teach’s head, which was required by Maynard to claim his prize, was carried home as a trophy on the bowsprit of the ship.

Maynard was awarded only a meagre prize of £100 from Governor Spotswood despite the sheer ferocity of the battle with the pirates and the wounds that the crew received.

Teach’s head was placed on a pole on the north shore of the Hampton River in Virginia. It served as a warning to other sailors who might think of making a career of piracy. The place is now known as Blackbeard’s Point.

Blackbeard’s ship grounded on a sandbar near Beaufort, NC in 1718, nine years after the town had been established. Blackbeard and his crew abandoned the ship and survived.

For 15 years, the North Carolina Department of Cultural Resources emphasized that the wreck, discovered in 1995, was “thought to be” the Queen Anne’s Revenge.

The struggle for Blackbeard’s legacy is continuing 300 years after history’s most infamous pirate was killed in the coastal waters of North Carolina.

The state of North Carolina is defending itself against two lawsuits brought by private interests in the excavation of the wreck of the Queen Anne’s Revenge, the flagship of Blackbeard’s small fleet of pirate ships.

The wreck was found in 1996 by Intersal Inc., private salvagers based in Palm Bay, Florida.

Excerpt from Pirates Of The Carolinas By:
Miller Pope | Author Illustrator and Historian

Find a selection of pirate books in our Island Life NC Store!