Sea Turtle Camp is a summer camp for children ages 10 to 17 that is immersive in marine biology with a mission to cultivate love and respect for the ocean located in Wilmington, North Carolina.

Sea Turtle Camp was founded to offer youth the opportunity to learn about marine biology through immersive, hands-on, feet-wet experiential education. Their mission is to cultivate a love and respect for the ocean by building confidence and developing character, while inspiring coastal conservation through safety, fun, and learning!

Sea turtles are one of the oldest living creatures in the world, but their numbers are being depleted faster than they can reproduce. While all the world’s problems can’t be solved by a camp, they know that one person can make a difference, and a camp full of eager knowledge-hungry young people can make a huge difference.

One of their goals is to share their passion for life and teach young adults how to mold that passion into a selfless, hard working team of individuals that can recognize problems and work towards solving them.
Through a grassroots approach, they strive to show campers a wide variety of possibilities at a time in their life where they have many potential roads to follow. In doing so they will learn the rewards of selflessly giving their time and energy to their communities, encouraging volunteer service and potentially impacting their career paths.

Ultimately, the goal of founders, Jen Civelli and Jean Beasley is to raise compassionate awareness and pour support into our life sustaining oceans. The Karen Beasley Sea Turtle Rescue and Rehabilitation Center is a place where many volunteers share their love and give their time to care for just one aspect of our oceans that many people take for granted.

The Sea Turtle Camp fill up quickly so those that are interested should go ahead and enroll as soon as possible!

The Full Sea Turtle Camp Schedules & More Information Can Be Found By Visiting Their Website Here! 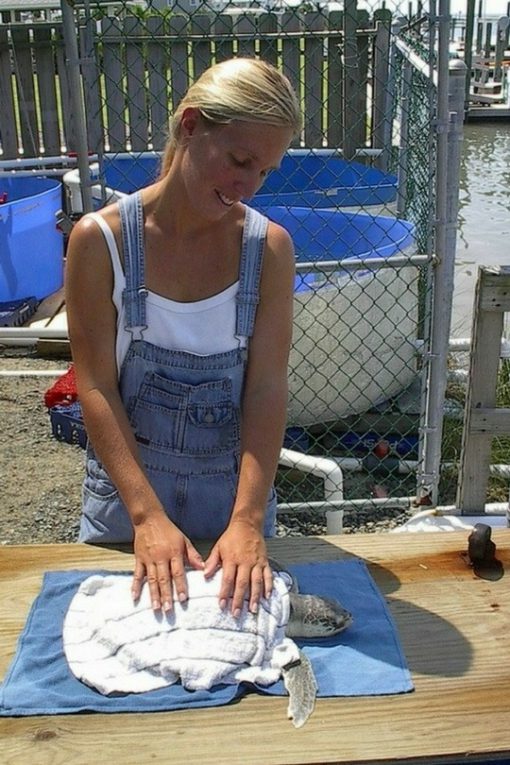 Jen Civelli, has spent years taking care of our oceanic resources. Jen had been a professor of chemistry at Cape Fear Community College, located in Wilmington, North Carolina and also taught several classes in the University of North Carolina Wilmington’s Chemistry department.

Jen loves to travel and has visited Puerto Rico, Antigua, St Lucia, St Thomas, St John, St Martin, Barbados, Los Cabos, Mexico and the Bahamas. She also loves to visit Hawaii, where she always has a blast surfing the long, fun waves of the South Shore. She taught at the college level for fourteen years. Her extra time is spent enjoying the ocean and the beauty it brings.She loves living in North Carolina because of the warm, crystal clear water that makes surfing that much more fun. Jen’s favorite thing to do is pack up the Toyota, 4-wheel out on Carolina Beach and find her own private surf break!

By getting married to the founder of WB Surf Camp in May of 2004, she is assured a lifelong adventure in environmental conservation, surf travel and marine biology exploration.

A chance encounter with a nesting sea turtle prompted Jean Beasley’s daughter, Karen, to found a project to protect the sea turtles, their nests and the emerging hatchlings on Topsail Island. After Karen’s untimely death, Jean took up the reins of her work.

Although neither had envisioned a sea turtle hospital, when a seriously injured turtle washed up on Topsail Island something had to be done. Before they knew it, the small group of volunteers was in the sea turtle rehab business and the Sea Turtle Hospital was born. Approximately 20 fully recovered sea turtles from the size of a dinner plate to the size of a dinner table are released back to the ocean each year thanks to their efforts.

The Karen Beasley Sea Turtle Rescue and Rehabilitation Center could not function successfully without its dedicated volunteers and donations from its supporters. At the hospital, the volunteers have made significant contributions to the field of sea turtle medicine but perhaps more importantly, they have listened to the message the sea turtles brought to them. The degradation of their habitat and the reasons behind their illnesses and injuries were hard to ignore. Jean began to speak of conservation and its importance, not only for sea turtles, but for the very survival of the planet itself. Now, recognized around the world for her conservation work, Jean continues to challenge all with her message that every person can make a difference and that together we can change the world!