There are not many people who can say that they have performed with or opened shows for Fleetwood Mac, Janis Joplin and Big Brother & the Holding Company, Steve Miller, Santana, The Grateful Dead, Ike and Tina Turner, Muddy Waters, Leon Redbone, Sly and the Family Stone, Blue Cheer, The Spinners, Maurice Williams and the Zodiacs, Keith Shealy, and the incomparable Stevie Ray Vaughan.

Mojo Collins can and then some!

After all of these accomplishments, this world renowned guitarist Mojo Collins considered his dues to be paid and moved on to follow his lifelong dream as a professional singer, guitarist, and songwriter on the Outer Banks of North Carolina.

Mojo’s music continues receiving critical acclaim with airplay in the US and 9 other countries over the last 20 years.  He has also been honored with several prestigious songwriting awards, including the North Carolina Arts Council Fellowship in Music for Songwriting.

As an active preservationist, Mojo was proud to perform at the dedication ceremony of NC’s Jockey’s Ridge State Park and at the relighting and rededication of the Cape Hatteras Lighthouse.

Mojo Collin’s musical career began at age five when his Grandmother began to teach him songs on her old Stella guitar.  His skills were continually honed at family jams and through lessons given by his father, “Wild Bill” Collins.

Mojo went on to join the Air Force and was stationed in Montana where he wrote much of the material which he would later take with him to San Francisco with his band “Initial Shock”.

It was in San Francisco that Mojo and “Initial Shock” made their way to the stage at the legendary Fillmore West and finally on to a contract with Bill Graham the most legendary of all rock promoters, .

In 1971 Mojo relocated from San Francisco to Eastern North Carolina, was married, and started a family which now includes 2 sons, their wives, and 6 fine grandchildren!

Mojo’s original music is presented in concert as well as in schools K4 to university, church music education programs, “The Lost Colony, Devon to Dare”, “Make a Preservation”, “Flight of Magic”, and “History of Folk and Blues”.  In 2007 Mojo released “Mojo Collins Live”.

Visit Mojo’s website and enjoy an online experience with Mojo and let the music take along its journey from the 60’s music scene of Haight Ashbury, to the legendary Fillmore Records / Fillmore West and all the way back home to the remote beauty of coastal Carolina. If you get the Chance – be sure to catch Mojo in one of his many live performances – where he really shines brightest!

Mojo Collins live at The Inn on Pamlico Sound

Every Tuesday in the summer you can enjoy live music on our waterfront deck. Take in the best sunset view on the OBX, with great food, and strong drinks as you enjoy acoustic music by local legend, Mojo Collins. – Free 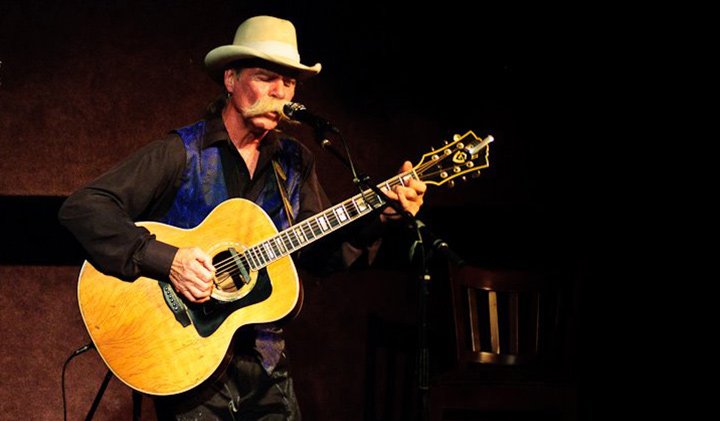