The current structure is not the island’s first beacon; an earlier light, begun in 1789, was commissioned by Thomas Jefferson and was lit at the end of 1794.

This first lighthouse was constructed too close to the water, it fell victim to erosion problems and was demolished by 1813.

Old Baldy has maintained its original form and location for 200 years. The most important purpose of Old Baldy was to mark the Cape Fear River entrance for the maritime sailors.  It was never intended as a light for Frying Pan Shoals.

The 109-foot-tall Old Baldy was constructed about a mile from the ocean in 1817 to illuminate Frying Pan Shoals, a dangerous stretch of shoals that extends more than thirty nautical miles out into the Atlantic. Its light was visible for about eighteen miles, never sufficient to completely illuminate the shoals.

Occasionally someone would come along and patch the lighthouse with new stucco; however, they did not use the same stucco as was used in 1817.

In January 1865 the Confederate forces disabled Old Baldy prior to losing control of the Cape Fear River in the battle at Fort Fisher. 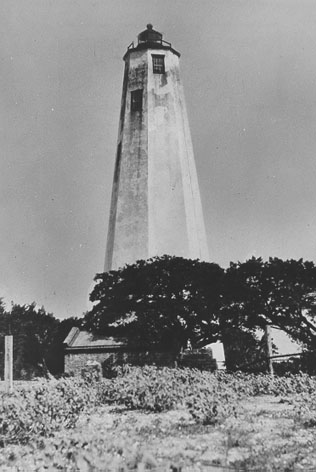 In the early 1900s, the Bald Head light was downgraded to a low-intensity, steady light and was finally discontinued in 1935.

From 1941 to 1958 Old Baldy produced a radio beacon to direct ships into the Cape Fear River channel in times of fog and bad weather.

The original fixed light was powered by 15 lamps. It was built as a parabolic reflector with hollow wick lamps, fueled by whale oil, and arranged on a metal rack.

Over the years, Old Baldy’s light has changed as a signal. In 1834, a new lighting mechanism was installed to flash red with a 30-second delay.

During the Civil War, the light was temporarily darkened and was relit in 1879. In 1893, the flashing light of Old Baldy was changed to white and new lamps were installed.

In 1903, Old Baldy became a fourth-order fixed light when the Cape Fear Lighthouse Station was activated.

Old Baldy was kept as an active light station by the government until 1935, and was even used as a radio beacon in World War II. In 1988, the historic light was relit but no longer serves as an “official” navigational aid.

Old Baldy remained in private ownership until 1985, even as it was listed on the National Register of Historic Places in 1975.

Then 1985 the Mitchell Family created The Old Baldy Foundation, Inc., a 501(c)3 not-for-profit organization, and donated the lighthouse and its surrounding grounds to the foundation.

Since then the foundation has never ceased in its efforts to maintain this piece of history that was left to them and has also worked to educate visitors from all over the world.

Old Baldy has become an icon for Bald Head Island as well as for the State of North Carolina.

With more than 28,000 visitors coming to see it every year, the foundation has estimated that roughly 50 percent of visitors are coming to the island just for the day.

While important for its historical significance, Old Baldy is also loads of fun to visit. Visitors to Old Baldy are able to up climb to the top during certain seasons, and then spend the rest of their time enjoying the shops, restaurants, and the beautiful island that she overlooks.