As strawberries start growing and sugar snap beans emerge from buds, it’s the first time in over 40 years that Holden Brother’s Farm Market won’t be opening their doors to share the bounty of spring.

For decades, David Holden and his younger brother Kelly Holden worked together to keep their produce market on US highway 17. Every spring, summer, fall and even into winter customers flocked to the business on rented family heirloom acreage just a few miles west of downtown Shallotte, NC.

Anybody familiar with Brunswick County knew Holden Brothers as one of the best places for farm-fresh produce and customers came to almost take for granted their pick-your-own strawberries ripe from their fields each spring. Then there was the homegrown corn, watermelons, and tomatoes in the summer and field-harvested pumpkins in the fall. Winter brought collards and other goodies like their homemade jams, boiled peanuts. They had Blenheim Ginger Ale available most seasons.

However, earlier this year, the landmark known as Holden Brothers Produce came to a sudden, noticeable stop. The farm and the market have both closed, all signs have been taken down and it appears that this traditional market will not be back this spring.

Things began to change last year shortly after one of the two Holden Brothers passed away.

On March 13, David Holden died at 77 after fighting a terminal illness, leaving his brother Kelly in charge of operations at the brothers’ jointly-owned and operated business that they had started together back in the 1980s as a small produce stand on the opposite side of the road by the entrance road to Ocean Isle Beach. This was back when U.S. Highway 17 was still a somewhat quiet, two-lane highway instead of the four lanes of busy traffic that Hwy. 17 is today.

David Holden’s passing left an enormous void. For many years he was a familiar sight as he handled the daily operations of the market while Kelly managed operations out in the fields.

That is how the two brothers decided long ago that things would be managed at the business that they built and rented on centuries-old ancestral family-trust land inherited by their parents, Paul and Minnie Holden.

For several months after David’s passing, all seemed to be going along as usual while the market continued to operate throughout most of 2019.

Unfortunately, family disagreements were mounting behind the scenes. David’s heirs did not see eye to eye with their uncle. Kelly, who turned 70 years old earlier this year, felt that he had no choice but to close the business.

Holden Brothers Produce is already sorely missed as a great place for all kinds of fresh, local produce, but also as a local landmark.

Here is an article from a previous issue of Island Life NC Magazine While Holden Brothers Remained Open:

Brothers Kelly and David Holden are legendary in the Southeastern area of North Carolina known as NC’s Brunswick Islands. You can find them just down “the Four Mile Road” from Ocean Isle Beach on nearby Highway 17 at Holden Brothers Farm Market – a Family Farm passed down from generation to generation since 1756!

The brother’s farm originated from a land grant to their ancestors, the Brooks Family, from King George the 2nd in 1756.

The Holden’s, and their ancestors, have been farming this land for over two hundred years, earning it the distinction of being a Bicentennial Farm. It is the 9th oldest farm in North Carolina that has remained in the same family.

Prior to 1984, the land was predominately used to grow tobacco. Sensing that times were changing, the Holden Brothers decided to begin to growing produce.

The first Farm Market was an open market at the corner of Ocean Isle Beach Road (4 Mile Road) and Highway 17.

In 1991 the brothers constructed an enclosed market, which has become a landmark of the area, at their current location near mile marker 10 of Highway 17. 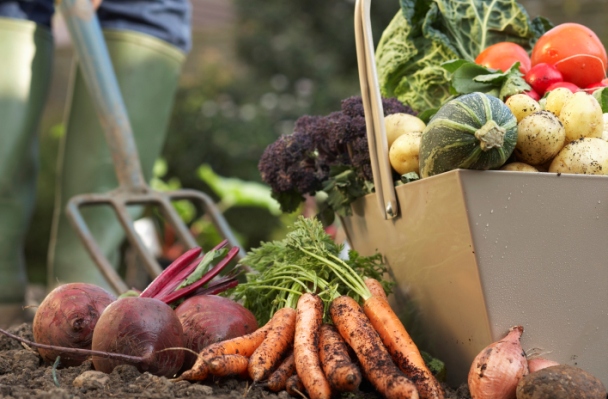 The Holden Brothers Farm Market specialized in locally grown produce. A majority of their fruits and vegetables are grown on 250 acres of the Holdens’ land off of Highway 17.

In order to offer their customers variety, the Holden Brothers supplemented their stock with out-of-season fruits and vegetables from other farms in North and South Carolina.

Purchasing locally grown produce was a boost to the local economy and an environmentally friendly choice as there was less gasoline consumption and packaging involved. Since it didn’t have to travel hundreds of miles before it gets to its consumers, the locally grown produce was significantly fresher and better tasting than that purchased at your neighborhood grocery store.

It was a sizable enterprise with all of the farming to do and then and there was the running of the store so the brothers, Kelly and David Holden, divvied up duties:

The process begins with the preparation of the soil; the land has to be tilled and weeded prior to planting.  Once planted, the crops must receive adequate nutrition and protection from pests throughout their life cycle.

A complex system of irrigation and drainage is essential to producing a successful harvest. Keeping the crops healthy is a delicate balance, too much, or too little, of any of the components can cause the crops to fail quickly.

The brothers were farming 250 acres of land, all of which was overseen by Kelly.

Kelly’s brother David was responsible for managing the market operation and customer service side of the business, which is no small task.

He ran both their wholesale and retail operations with an emphasis on southern hospitality and small-town charm. While most of their produce was grown on their own farm, David supplemented his stock with fresh produce from other farms in both North Carolina and South Carolina.

This ensured that customers were offered a wide variety of fruits and vegetables without having to make any extra stops.

Holden Brothers Farm store offered a great selection of vegetables and fruits throughout the season.

The fall brought colorful selections with pumpkins, Scuppernong and Muscadine grapes, gourds, Indian corn, and pick-your-own tomatoes. The harvest list was extensive, with them even carrying fresh flowers and decorative produce to accentuate homes and dishes around the holidays.

At Holden Brothers Farm Market you can be a part of a traditional past-time where families have taken their children to pick ripe, juicy strawberries!