January 19th marks the 155th anniversary of the Second Battle of Fort Fisher.

In the final years of the war between the States, Wilmington, North Carolina was the second most important city to the Confederate States of America. Only Richmond, the Confederate capital, was more crucial to the South’s fortunes.

Wilmington, connected to Richmond by railroad, was the closest seaport that could supply Lee’s Army. By late 1864, in fact, virtually every other Southern port on the Atlantic seaboard had been closed by the Federal blockade.

But south of Wilmington the Confederate army had constructed some of the world’s most sophisticated fortifications for the time, and blockade runners could still get into the port city. Mighty Fort Fisher and the other defenses successfully frustrated Union efforts to close the two entrances to the Cape Fear River and this to Wilmington.

After the Union’s disastrous attempt to take Fort Fisher in December 1864, a second massive attempt was undertaken in January 1865. The second assault was all out.

The Union navy unleashed the largest bombardment in history up to that time, and the federal army 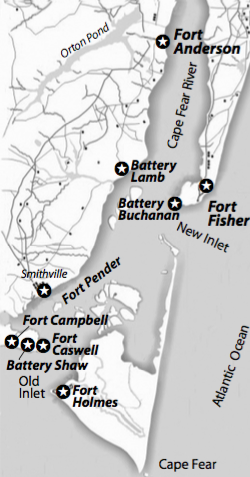 landed an overwhelming number of soldiers to assault Fort Fisher from the land.

Col. Lamb and his men made a truly heroic defense but to no avail. The young colonel was badly wounded and the fort fell.

The garrisons of forts Holmes, Campbell, Pender, and Caswell were withdrawn to reinforce Fort Anderson, whose turn would be next.

By January 19, 1865, Federals controlled everything up to Battery Lamb, only four miles from Fort Anderson but they waited to amass overwhelming force before attacking.

By February 1865 the Confederates had managed to assemble about 2,300 men to defend Fort Anderson. This would be a pitiful force, however, compared to the
numbers against them.

When word reached the commander of the Cape Fear District, Gen. Hoke, that Fort Anderson was about to be invaded from the rear and cut off from Wilmington, he ordered the fort evacuated to save its garrison.

The defenders of the fort quietly slipped out on the night of February 18 and marched up the road to Town Creek, where they took up new positions to further delay the fall of Wilmington.

With the dawn, the Union tide broke over the empty fort and was greeted by shells from their own ships in the river. The last shots fired at Fort Anderson were blue on blue! The Union navy was fighting against the Union army.

Buy it in the Island Living Store here!