These Coastal NC beach prints of photos by Dwayne Schmidt are perfect for decorating a home at the beach!

Dwayne Schmidt is a award winning photographer who travels from the mountains to the coast doing all forms of photography.

From newborns to weddings to landscape photography.

Several of his pictures have been published in books and magazines.

Two years ago Dwayne and his work were featured on The Today Show, NBC Nightly News, Good Morning America, Fox News, CNN and in magazines and newspapers all over the world when a photo of his went “viral” on the internet.

Dwayne Schmidt’s photos of the barrier islands of NC are available as museum quality giclee prints in the Island Life NC Online Store! 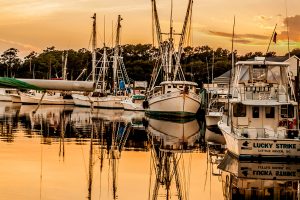 Dwayne Schmidt’s photos of the barrier islands of NC are available as museum quality giclee prints in the Island Life NC Online Store!

Dwayne’s photo of a young Marine praying with his bride-to-be went viral soon after it was posted on Facebook by the wedding photographer.

The image held great poignancy with media around globe as it coincided with Memorial Day last year.

The story behind the image:

U.S. Marine Cpl. Caleb Earwood wanted to pray on his wedding with his bride Maggie before their ceremony but as everybody knows it’s bad luck for the groom to see the bride in her wedding dress before the ceremony.

So with the assistance of their family and wedding photographer Dwayne Schmidt, Caleb came down the stairs of the rental home where Maggie was getting ready for the service, and Maggie came out from the door on the ground floor.

With their eyes closed they both reached around to find each others hands. The couple joined hands around the corner so as not to break the tradition and see each other before reaching the altar.

“They hid me in a room and he stepped up on the stairwell and he stuck his hand out and I grabbed his hand,” Maggie Earwood told ABC News.

“As soon as their hands touched he started getting emotional,” Schmidt told ABC News.

“The whole room was full of emotion,” Schmidt said. “I tried not to cry and focus on what I was doing.”

The image shows the couple as they are turning away from each other, with their hands joined, as Caleb prays out loud and Maggie tries to hold back her tears. Caleb prayed for their marriage, asking that their union be strong enough to serve as an example for all young couples, Schmidt said.

“It broke me down,” Maggie Earwood said, “to know that we felt the same way about God. It just made me happy.”

“There were no dry eyes in the room,” she said.

Schmidt posted the photo to his Facebook page that night, meaning for it to be a sneak peek of his day’s work, but it quickly garnered more than 28,000 likes and went viral across the Internet. Dwayne Schmidt’s website had over 52,000 visits within 24 hours!

“So many people are emailing me,” Schmidt said, “saying thank you for sharing this. It’s what America is supposed to be about.”

The couple went on their honeymoon before returning to Camp Lejeune in Jacksonville, North Carolina, where Caleb is based.