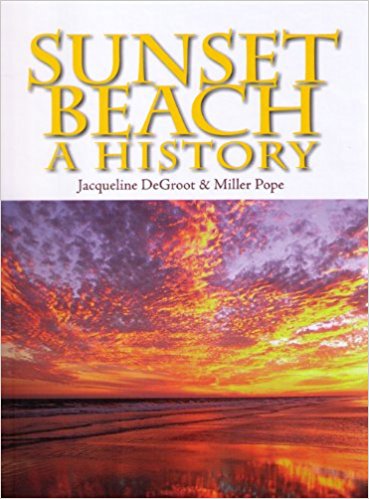 A full history of Sunset Beach NC with stories from many of the “old timers” who were eye witnesses to events. Some are funny, some are shocking – all are fascinating. No true Sunset Beach Lover should be without this book!

This book is not a chronicle of everyday town government minutiae. If you seek a record of town council battles and meetings you will have to seek it elsewhere.

There is little debate that the number one issue that has fueled among town factions for years has been “The Bridge.” As this is being written, the war that raged for decades and has cost the state and federal treasuries millions of dollars is at last over. The court has spoken – a new high-rise bridge will now serve the town.

Over the years, there have been many issues that have caused division between the townsfolk, and almost all the interviewees mentioned being involved in a debate or two.

At the end of the day, after all is said and done…we are all blessed to be here, in this paradise by the sea.

The people in this book have contributed to this endeavor by telling their stories. Without them, this book would not have been written. And so…we give you a journey through the past.

Locals should want a copy of this handy, 144-page, hardcover volume, which follows the format of coffee table edition you might see in banks, doctors’ offices and hotel lobbies. The price is $29.95.

Separate sections note the “Kindred Spirit” beach mailbox (did you remember it was once orange?), the wreck of the Civil War blockade runner Vesta, the Ingram Planetarium, the Bird Island sanctuary and more. A number of prominent local residents are profiled; you can bet the Gore family gets plenty of space.

(In case you’re a newbie and don’t know who Mannon C. Gore is, flip to page 24, and there’s a photo of him in his World War II Navy uniform. Gore, incidentally, built the first bridge to Sunset Beach, all the way back in 1958.)

Jacqueline “Jack” DeGroot and her husband Bill, bought property in Sea Trail Plantation in 1992 and began planning their ‘early retirement,’ (if one could consider it retirement with three kids in tow). In 1996 they both retired from their jobs. You can often see Bill and Jack having lunch at local restaurants squabbling over issues for the next book.

DeGroot, who was once one of northern Virginia’s top auto sales managers, bought property at Sea Trail with her husband back in 1992 and settled here permanently in 1996. She’s a prolific author of (often steamy) romance novels and mysteries, including “Secret of the Kindred Spirit” and “Shipwrecked at Sunset.” Earlier, she and Pope collaborated on “Tales of the Silver Coast,” an informal history of Brunswick County with an emphasis on the beaches. Her website is www.jacquelinedegroot.com.

Miller Pope was a partner in a New York ad agency and a freelance illustrator. He was a member of the Society of Illustrators, a prestigious group of talented artists. He and his wife, Helen, bought property at Ocean Isle in 1969. And avid historian, his first book was a history of Brunswick County. He wrote and illustrated fourteen books.

Pope was once one of America’s top magazine illustrators and a partner in a New York advertising agency (a past he chronicled in his delightful little book “Confessions of a Mad Man”). He relocated to Ocean Isle Beach in 1975 and was one of the original partners in Sea Trail Plantation. He had a great love of history especially buccaneers and has wrote about them in such books as “Pirates of the Carolinas” and “Infamous Pirates and Their Incredible Lives.” Check him out at www.millerpope.com.